2010 is officially over, wrapped up, and complete. We are happy to report that we had a very successful year thanks to our clients’ continued loyalty and support. With a strong year coming to an end, we’re optimistic about the coming year and are very excited about 2011.

Did you know that it has been 15 years since the day Magic Jump, Inc. first opened its doors as a small factory in Glendale, California? During that time in the inflatable amusement industry, we have witnessed great advancements that have taken place in our own factory and in the industry overall. In our early days, we introduced new A-frame bounce house designs to the lineup of traditional Castles. In the start of 2002, Magic Jump, Inc. revolutionized the inflatable party rental industry with its creation of the Mini Slide, now known as Fun Combos, which offered a bouncer, wall climb, and slide. We blew everyone away in 2006 with our design of the X-Slide which featured the world’s first inflatable slide with criss-crossing lanes. I’m sure we have all been amazed by how creative inflatable games have gotten in recent years with the help of 3D software and digital graphics. 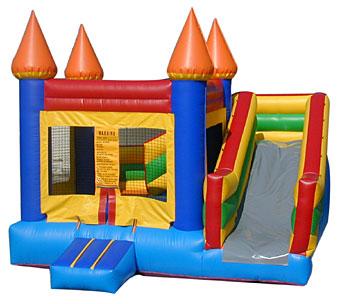 At the turn of the millennium it was evident that China-made inflatables were soon going to flood the amusement industry. The result of in overseas labor has been an abundance of inferior inflatables available today with very little creativity and cheap workmanship. We are proud to have not given in to the temptation of cheap overseas labor to produce our inflatable products. With the flood of inflatable goods available today, safety is an even bigger concern. Our goal is to create a greater awareness of safety in inflatables and to hopefully assist in establishing stricter regulations in place at different states.

Keep your eye out for new releases from Magic Jump coming spring of this year. Go to our Sales page now and take advantage of the great savings going on now. Most products are IN STOCK and ready to ship.

We thank you all for your continued support and valued business. We look forward to providing you with even better products and service in the coming year.